What actually is the Pelvic Floor and WHY does it matter? Part 1. The Bones of the Pelvis.

To understand the pelvic floor, first we really need to learn about the pelvis.

What is the pelvis?

The pelvis is the large bony ring that you probably think of as being your hip bones. When you put your hands on your hips, you’re most likely putting your hands on the top part of your pelvic bones.

The pelvis connects your spine to your legs, and houses some really important internal organs including your bladder (wee), uterus (baby), rectum (poop).

The pelvis is made up of 4 large bones.

So how does all this relate to the pelvic floor muscles?

The pelvic floor muscles attach to the base of your pelvic bones in a diamond or kite like shape. They’re involved in stabilising your pelvic bones both from within and beneath your pelvis. And they form the ‘floor’ of your core system, responding to and relating to the way you breathe, move your body, and even feel and think!

So what are the Pelvic Floor bones?

Now it gets a little more confusing, because those big ‘wagon wheel’ shaped bones, the Illia, have different names for their different parts. And two of those parts are really important for understanding the pelvic floor.

Right at the base of your pelvis in the middle between front and back, you have two bones called Ischial Tuberosities, or in the image above they’re called Ischium. These are often known as Sitz bones and they’re actually the base of each Illium bone. There’s one Sitz bone under each side of your pelvis, they’re the bony bits you feel when you sit on a hard surface.

On the lowest part of your pelvis at the front, the two big Illium bones come together to form what is commonly known as the pubic BONE. The two front halves of your Illia connect together via thick fibrous cartilage, and form what is actually called your Pubic Symphysis. Because the pubic bone/symphysis is really a JOINT, not a bone.

And so the Pelvic Floor Bones are made up of the base of the boney pelvic ring and they include the two Sitz bones one on each side, your Coccyx at the back, your pubic bone at the front. And underneath and inside these bones, is where you’ll find your Pelvic Floor Muscles!

Does the Pelvis have any joints?

The pelvis is a ring like, super sturdy, mostly bony structure. But it’s not rigid, the pelvic joints do move a little bit.

The pelvis also includes some joints, these include the Sacroiliac joints which are where the sacrum connects to each Illium at the back, and the Pubic Symphysis (Pubic Bone) which is where the two Illium connect via cartilage at the front. These joints are pretty stable joints – not at all like your shoulder joints which move A LOT. Nonetheless, the pelvic joints do move, just a bit. And the way they move is particularly relevant to pregnancy, birth and postpartum.

So what happens to your pelvis?

During pregnancy and birth your body is flooded with lots of different hormones, and there’s a hormone called relaxin that works to soften the ligaments of the pelvis. This allows the pelvic joints to release, lengthen, and stretch a little during labour and birth to allow for your baby to move through your pelvis to be born.

During labour, the top of the Illia open and widen to let baby move into the top of your pelvis, and then as your baby wriggles through the base of the pelvis for birth, the sitz bones widen to allow your baby to be born.

As the baby moves through your pelvis your sacrum pivots a bit like a swinging door. The top part of your Sacrum round’s out like a mound as your baby’s head enters your pelvis, and then the base of your sacrum swing’s open to allow space for your baby to be born. Incredible!

Your body, your pelvis is incredible!

Click here to join my newsletter and learn more about your incredible birthing body.

Image is from the book Preparing for a Gentle Birth by Blandine Calais-Germain.

Recent Posts
Grow Your Village
Connect With Me

I acknowledge and pay my respects to the Wurundjeri people of the Woiwurrung language group as the true owners of the land on which I live, learn and practice. I extend this respect to elders past, present and emerging and thank the great creator Bunjil for looking over and protecting us. 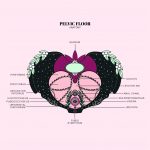